Health-care workers and patients have suffered through thousands of attacks on health-care systems five years on from the U.N resolution calling for an end to impunity for such attacks (3 May 2016). This is seen in the data recorded by the International Committee of the Red Cross (ICRC) in countries affected by conflict and other emergencies.*

“How would my work be if I didn’t live in a conflict zone? I would leave my house without fear. I could go to bed without worrying whether someone will come to my door, threaten me or break down my door,” states a Colombian ambulance driver.

In 2020 in Colombia, there were more than 300 attacks on medical personnel throughout the country, the highest rate of violence in more than two decades.

Since the adoption of the UN Resolution, the ICRC counted 3,780 attacks during the five years between 2016 and 2020, in an average of 33 countries each of those years. This makes an annual average of 756 incidents – of attacks, threats, gunshots, fires, kidnappings, shellings, killings and directed violence – that target health-care workers around the world.

In Olo Ambolong village in Marawi City, Philippines, midwife Rakila Guro recalls the ransacking of their health station at the height of the 2017 conflict there. “We lost the microscope, the birth delivery seat, glucometer, the blood pressure apparatus – even the nebulizer was gone. I used to have all the basic instruments. They were all gone.”

Violence also acts as a barrier to people seeking health care. In Burkina Faso, when Alidou Sawadogo’s elderly mother fell ill, he faced a long and dangerous journey to get treatment for her.

“When she collapsed, a friend called me,” he explains. “By the time I arrived she was already unconscious. I decided to take her to the health center and luckily someone who had a motorcycle helped me. Because of the violence many people who are sick wait at home and die. Everyone is afraid of taking the road to the health center in Barsalogho.”

Across Burkina Faso, over 800,000 people have little or no access to health care. Dedicated health workers, among them Dr Bertrand Dibri in Barsalogho, are struggling to meet the needs, and to stay safe themselves.

“This is one of the few health centers that isn’t closed,” he says. “We don’t have enough equipment. And the insecurity has caused huge anxiety among health workers.”

While health care is at the forefront of global attention, more needs to be done to protect health care workers and medical facilities. The International Committee of the Red Cross reiterates its call for an end to violence against health-care workers. 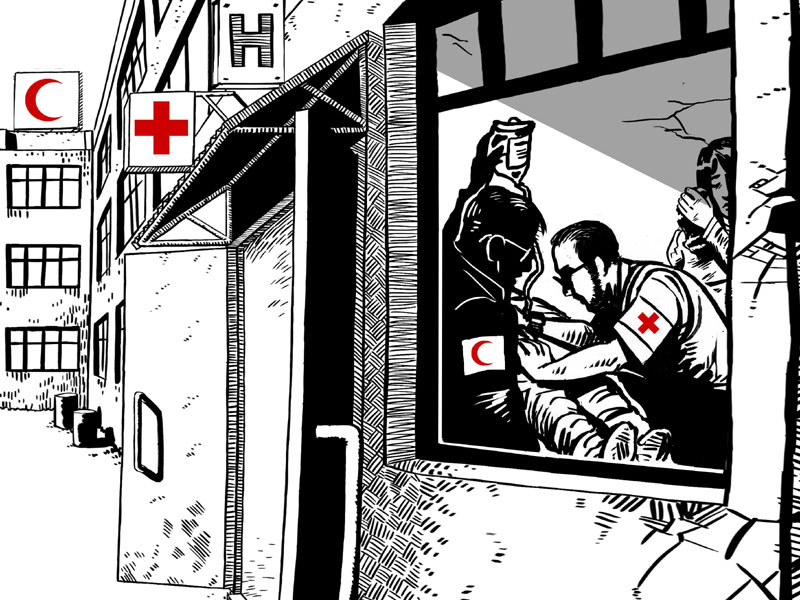 *About ICRC’s health-care attacks data: The data concerning events affecting the delivery of health care was collected from January 2016 through December 2020 by ICRC teams in an average of 33 countries per year where the ICRC has an operational presence, meaning countries experiencing conflict or violence. The data is not meant to be exhaustive but rather representative of what the ICRC sees in locations it works. Because such data collection is often quite challenging, the data is likely an undercount of the true number of attacks and cases of obstruction.

Mr. Phan Wannamethee, Advisor of the Thai Red Cross Society, on the occasion of receiving a National Elderly Award 2022
11/04/2022

The Thai Red Cross Society and network partners provide the proactive COVID–19 vaccination rollout for displaced persons.
18/02/2022
Popular Post
Go to Top
We use cookies on our website to give you the most relevant experience by remembering your preferences and repeat visits. By clicking “Accept”, you consent to the use of ALL the cookies. However you may visit Cookie Settings to provide a controlled consent.
Cookie settingsACCEPT
Manage consent

This website uses cookies to improve your experience while you navigate through the website. Out of these cookies, the cookies that are categorized as necessary are stored on your browser as they are essential for the working of basic functionalities of the website. We also use third-party cookies that help us analyze and understand how you use this website. These cookies will be stored in your browser only with your consent. You also have the option to opt-out of these cookies. But opting out of some of these cookies may have an effect on your browsing experience.
Necessary Always Enabled
Necessary cookies are absolutely essential for the website to function properly. These cookies ensure basic functionalities and security features of the website, anonymously.
Functional
Functional cookies help to perform certain functionalities like sharing the content of the website on social media platforms, collect feedbacks, and other third-party features.
Performance
Performance cookies are used to understand and analyze the key performance indexes of the website which helps in delivering a better user experience for the visitors.
Analytics
Analytical cookies are used to understand how visitors interact with the website. These cookies help provide information on metrics the number of visitors, bounce rate, traffic source, etc.
Advertisement
Advertisement cookies are used to provide visitors with relevant ads and marketing campaigns. These cookies track visitors across websites and collect information to provide customized ads.
Others
Other uncategorized cookies are those that are being analyzed and have not been classified into a category as yet.
Save & Accept